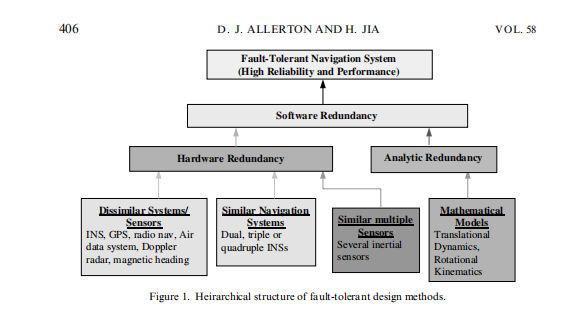 A typical system-level redundancyarchitecture is shown in Figure 2, where each Inertial Navigation System (INS) operates independently and there is no data communication between these systems. This is generally known as an independent system architecture. Each INS can also be integrated with other navaid systems to improve the navigation accuracy and to control the growth of inertial sensor errors with time. Fault-tolerant methods used to check the consistency and failures of all the INSs are typically majority-voting methods or weighted-mean methods. In order to achieve fail-operational/fail-safe operation, at least three INSs are needed in this configuration. In other words, at least nine pairs of inertial sensors (accelerometers and gyros) are needed, where each INS is a conventional orthogonal configuration. The main advantage of this architecture is that the design and integration is simple and does not require complex fault-tolerant methods for the diagnosis of system failures. However, if any sensor in one INS fails, then this INS has to be removed from the fault-tolerant architecture. Consequently, this architecture cannot exploit the benefits of redundant inertial sensors to dynamically reconfigure an aircraft navigation system when one INS fails. This traditional redundant architecture is still used in many existing avionic systems6 , although these systems are expensive and the duplication of INS modules can result in a significant increase in mass. 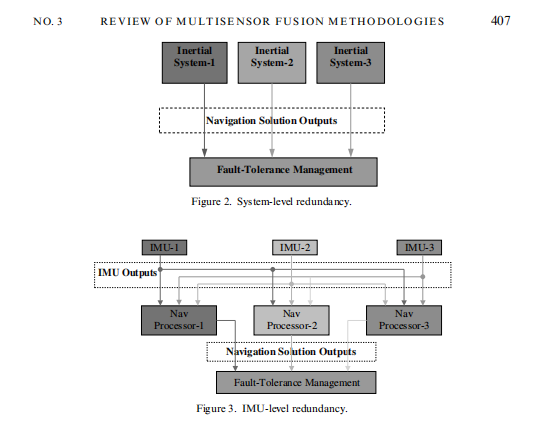 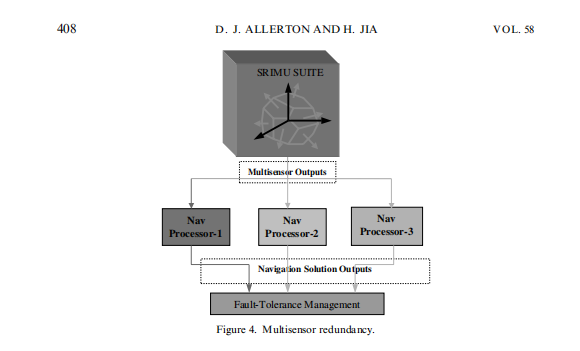 An IMU-level redundant architecture used inmany aircraft navigation systems is shown in Figure 3, where duplex or triplexconventional IMUs are configured in a federated architecture to obtain fault tolerance. Each IMU can be skewed with respect to the aircraft body axes when it ismounted in the aircraft in order to reduce the number of IMUs7. Theoretically, a fault-tolerant navigation system consisting of two IMUs affords fail-operational/failoperational/fail-safe operation if one of these IMUs is skewed relative to the aircraft body axes, or is a non-orthogonal IMU. In this configuration, six pairs of inertial sensors can achieve a higher level of fault tolerance in comparison with three independent INSs. Each navigation processor can combine the outputs of all IMUs with data from aiding systems to estimate the aircraft motion states and to perform sensor failure detection and isolation and system reconfiguration. Compared with the INSlevel redundancy, this architecture significantly increases the level of fault tolerance and makes effective use of existing IMU equipment.

However, resultant fault-tolerant systems still share some of the disadvantages of system-level redundant architectures and considerable efforts are being made to reduce volume, weight and cost. 2.2.2. Multisensor RedundancyAn alternative development is to integrate multiple inertial sensors in a single suite in the form of non-orthogonal configurations3, known as skewed redundant IMU (SRIMU) configurations. One multisensor suite can thus replace multiple IMUs to reduce the volume, weight and power required for an aircraft navigation system. A representative architecture of multisensor faulttolerant systems is shown in Figure 4, where the multisensor suite is a dodecahedron configuration. Six pairs of inertial sensors are installed perpendicular to the parallel faces of a regular dodecahedron. The SRIMU outputs are sent to redundant navigation processors, each individually performing the navigation and attitude computations, sensor FDI functions and navigation system reconfiguration. The multisensor redundancy is a cost-effective approach that exploits the benefits of emerging inertial sensor technologies and high-speed embedded microprocessor systems. Multisensor technology will provide the basis for the future generations of fault- tolerant navigation systems. 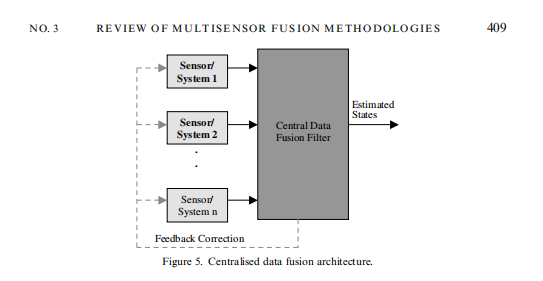 Distributed redundant architectures is a new fault-tolerant concept which has been developed with the introduction of distributed and integrated modular avionics architectures. A current combat platform may have a total of twelve traditional IMUs of various quality, providing the state vector information required by avionic systems and weapon systems8 . In this architecture, inertial sensor systems are mounted at several locations in an aircraft, not only to meet the fault tolerance requirements of navigation systems, but also to provide accurate local inertial vector states for other systems, for example, weapon control systems and imaging sensors and to provide radar stabilization and motion compensation. The concept of using an inertial network for aircraft avionics was initially proposed by Kelley, Carlson and Berning8 in 1994. However, no research has been published describing a systematic study of inertial network architectures for fault tolerant aircraft navigation systems, in terms of combining data fusion methods,dynamic alignment and correction of distributed inertial sensor systems and distributed sensor failure detection and isolation techniques.

The centralised filter architecture is illustrated in Figure 5, where measurements or data from all navigation sensors/systems are processed in a central data fusion filter to obtain the accurate estimates of aircraft motion states. This architecture is the most common filter design implemented in current integrated navigation systems, including INS/GPS/Doppler integrated systems9, GPS/Doppler integrated systems10 and tightly-coupled GPS/inertial systems11,12. In these systems, INS outputs and raw GPS measurements are combined in a centralised filter to estimate the navigation state errors and sensor errors, including GPS receiver clock errors, inertial sensor errors and baro-altimeter errors. Numerous covariance analysis methods and numerical computations of the standard and extended Kalman fifilters have been reported in the literature. Theoretically, the cen tralised fifilter can obtain optimal estimates of the aircraft motion states. However, with the increasing number of sensor systems in aircraft, the fifiltering algorithms can be quite complex and the centralised fifilter computation can be time-consuming as a result of the large number of states in the dynamic models of the fifilter. Accordingly, the centralised fifilter is not necessarily an appropriate methodology in the develop ment of fault tolerant multisensor navigation systems20,29,31. To overcome the limitations of the centralised fifilter, other fifilter architectures have been developed.

However, development of this adaptive process and identifification of the measure ment noise matrix are not reported in detail. In order to improve the robustness of the cascaded fifilter to input conditions and adverse environments, Karatsinides16 proposes two methods for dealing with the GPS position bias and identifying the statistical values of measurement noise for the cascaded fifilter. The GPS positioning solution contains biases resulting from satellite clock errors, ephemeris errors, ranging signal propagation delay and geometries of visible satellites. Although GPS position bias is unobservable and cannot be esti mated in the GPS fifilter, it can inflfluence the accuracy of cascaded GPS/INS systems through the error covariance matrix. The fifirst method models GPS position bias as a fifirst-order Gauss-Markov process and then uses these biases as the consider-states of a Schmidt-Kalman fifilter. The part of the Schmidt-Kalman gain matrix related to the consider-states is set to zero in order to ignore the estimated consider-states. The second method computes the variances and covariances of the errors of the navi gation states derived by the GPS fifilter, using conventional computation equations of variance and covariance, provided that the update rate of the cascaded fifilter is less than the GPS fifilter. The cascaded fifilter architecture can be used to integrate existing navigation systems into a fully integrated system and may only require minimal modififications to existing navigation systems. In practice, most existing navigation systems do not output covariance data of the navigation state errors. Consequently, the cascaded fifilter is extremely dependent upon the methods that are used to estimate the covari ances of the primary fifilter and the performance of the primary fifilter. Moreover, tuning of the primary fifilter is of critical importance to the performance of the cascaded fifilter15. 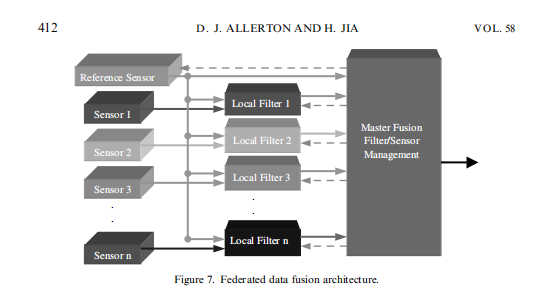 Kerr27 proposes a decentralised fifiltering structure but the decentralised fifilter algorithms applicable for this structure are not detailed. However, some fifiltering malgorithms, for example, Speyer’s parallel fifiltering algorithms26, may be used for this decentralised structure. In terms of the fifilter architecture, Kerr’s version is similar to the federated fifilter architecture given by Carlson17. The difffferences between these architectures are the individual methods used for detection and isolation of sub system failures. For example, Kerr’s fifilter uses voter/monitoring methods based on Gaussian confifidence regions of the estimated states whereas Carlson’s fifilter uses fifilter residuals to detect sensor and subsystem failures.

Hong30 presents a distributed multisensor integration algorithm in which the local measurements, together with previous global estimates obtained via the communi cation network, are locally processed to obtain the local state estimate and the local error covariance. These local estimates (state and covariance) are fused in a central fifilter to obtain the global estimate. Because the local state and covariance predictions are derived from the previous global estimates, the local fifilters have no state models. However, rotation matrices and translation transformations are introduced to defifine the relationships between the local states and the global (central) state. Moreover, this algorithm was designed to minimise the uncertainties of these transformations. It should be noted that the same relationships are also used for the measurement transformations from the local nodes to the central node. This is not necessarily true in distributed inertial sensor systems, especially when a nonlinear relationship exists between the measurements and the states. Compared with Speyer’s fifiltering algor ithm, this method simplififies the complexity of the distributed fifiltering algorithms. However, the local states greatly depend on the global states because this method lacks local dynamic models. Roy et al31 propose a square root fifiltering structure where parallel local fifilters have a smaller dimension than the global fifilter. Paik et al32 develops a gain fusion algor ithm for decentralised parallel Kalman fifilters to obtain computation-effiffifficient suboptimal estimation results. Raol et al33 describe a decentralised square-rootinformation fifiltering scheme where all information fusion is processed locally at each node and there is no central fusion. These algorithms can improve the computational precision and numerical stability of existing distributed fifiltering algorithms. Fully distributed fifiltering architecture and information fusion algorithm are developed, where no central data fusion centre is needed34. Each local fifilter has its own local system model and processes the local measurements and information assimilated from other fifilters to obtain a global estimate of the system state. However, there is still a key problem to be considered; the dynamic relationship between the local states must be determined, especially if the local state models are difffferent. Berg et al35 describe the static relation between the local states and the global state using an approach similar to Speyer’s method25. For aircraft systems, multisensor data fusion offffers potential improvements in performance in the following areas of navigation: